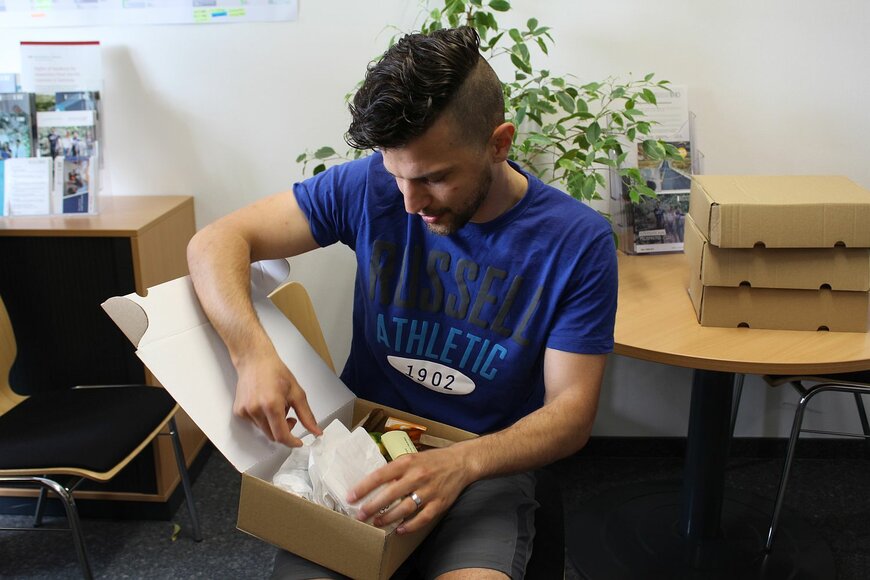 Virtual "Taste the World" as part of the International Week

Despite Corona: Eating and feasting together at the virtual "Taste the World"

The International Office of the Deggendorf Institute of Technology (DIT) traditionally organises the International Week every year. The highlight of the week was the virtual event "Taste the World", where international students cooked their favourite dishes from their home countries.

Virtual events are currently on the increase and participants are often already tired of sitting in front of screens. However, the opposite was the case at the first virtual format "Taste the World" organised by DIT's International Office. Participants were given a "Taste the World - to go box", which they could pick up in advance at one of the many DIT locations. The fact that the participants came not only from Deggendorf, but from the locations in Pfarrkirchen, Cham and the total of 12 Technology Campuses shows that food connects people like no other medium.

"Taste the World" offers a somewhat different journeys around the world, which not only makes foreign countries tangible, but also offers a first taste, and that in the truest sense of the word. This year, the event featured three courses from two continents. The starter was "Bread Upma", an Indian speciality.This is a bread with flavourful spices, herbs and tomatoes. The main course came from South Korea. "Kimbap" - a Korean sushi roll. Finally, "Baghrir", a traditional North African pancake made of semolina, was cooked, which is also a popular dessert in Morocco. Everything was prepared by the students at home. Via zoom, the participants could also recreate the dishes in their own homes with the ingredients from the "Taste the World - to go box".

Previously, the event was always held on site at the campus in Deggendorf, but that was not possible this year. Therefore, the idea of the boxes and the transmission via Zoom came up, which in the end hit like a bomb. The consistently positive feedback from the participants and the fact that the offer was equally well received at all DIT locations underline the unifying character of cooking and feasting together. Not only students and staff took part in the first virtual "Taste the World", but DIT President Prof Dr Peter Sperber also cooked at home himself. The student assistants, who prepared the boxes and then distributed them to the respective locations, ensured that everything ran smoothly in the run-up to the event. Due to the great response and the consistently successful event, the International Office is considering offering "Taste the World" again on campus in the future, but also as a virtual format.

During the International Week from 21 to 25 June, numerous other events were offered in addition to cooking together at "Taste the World". For example, there were various information events about semesters abroad and internships, or the traditional Erzählcafé/KULTURcafé, where international students reported on their home countries, this time about celebrities in the various countries. The international tutors and the student association ESN were also actively involved in the International Week. They helped organise quiz and game nights. The Bavarian Crash Course, which taught international students about Bavarian culture and language, was very popular.

The International Office looks back on an informative and entertaining International Week, which not only united people from different countries and cultures, but also the university family across campuses.

Bild (DIT): A participant inspects the "Taste the World - to go box", which contained all the ingredients for the international recipes, when picking it up on campus.