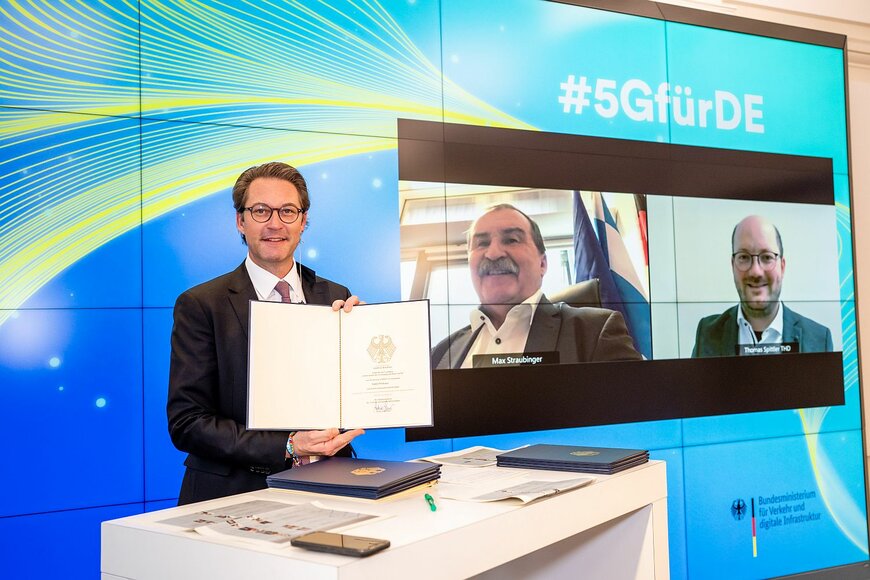 Lighthouse project for medical care in the district of Rottal-Inn receives funding notification for € 3.64 million

Together with project partners, the district of Rottal-Inn has committed itself to improving medical care in the district of Rottal-Inn in the "med4PAN" project. The European Campus Rottal-Inn (ECRI) of the Deggendorf Institute of Technology (DIT) is responsible for the overall management of the project. For this idea, Federal Minister of Transport Andreas Scheuer presented Max Straubinger, Member of the Bundestag, and the project team around project leader Prof. Dr. Thomas Spittler with a funding decision amounting to € 3.64 million on 18 November.

In his speech at the handover of the funding notification, Federal Minister of Transport Andreas Scheuer highlighted the project as a lighthouse project that can also be applied to many other districts and will sustainably improve medical care in rural areas. The Minister also emphasised that he would continue to personally support the project. For MP Max Straubinger, who was present at the handover as a member of parliament for the district, "med4PAN" is also a lighthouse project. He emphasised the importance for rural areas and how the project will improve the lives of citizens in the event of an emergency or treatment in hospital in the district of Rottal-Inn.

In Rottal-Inn, the district with the most scattered settlements in Germany, the distances between hospitals in an emergency are longer than average and every minute counts for the patient. In order to be able to counteract this problem in the future, the "med4PAN" project is investigating the use of state-of-the-art technologies in medical care in four concrete application cases.

The project starts before patients even arrive at the hospital. By linking the ambulance service and the Rottal-Inn clinics, the care of patients who are in an emergency situation in the ambulance is to be improved. For this purpose, live videos of the patient captured by a 360° camera in the ambulance are transmitted to the emergency room and the doctors can get an idea of the situation before the ambulance arrives. In addition, the project aims to improve teleconsultation communication, allowing specialists from different locations of the Rottal-Inn hospitals to exchange information virtually and thus contribute to telemedical decision support. This will reduce time, cost, burden and stress for all involved and improve patient care. The project aims to facilitate the localisation of objects and people in clinics. For medical staff, this would lead to a great relief, as the required device can be located, found immediately and the patient thus helped more quickly.

In addition to the actual cases in the ambulance and the clinic, the project will also establish a so-called innovation hub at ECRI. Within the framework of this, applications based on state-of-the-art technology will be scientifically developed, tested, evaluated and scaled for further use cases. This includes, for example, the delivery of a defibrillator by drone or the transmission of images of a high-resolution histopathological section to the specialist in real time.

The "med4PAN" project is led by Prof. Dr. Thomas Spittler and supported by Anna Schmaus-Klughammer, LLB (hons.), as coordinator of the project at DIT. Besides the district of Rottal-Inn, the Rottal-Inn Clinics, the Bavarian Red Cross, the Fraunhofer Institute and the companies medDV and becon GmbH are involved as project partners.