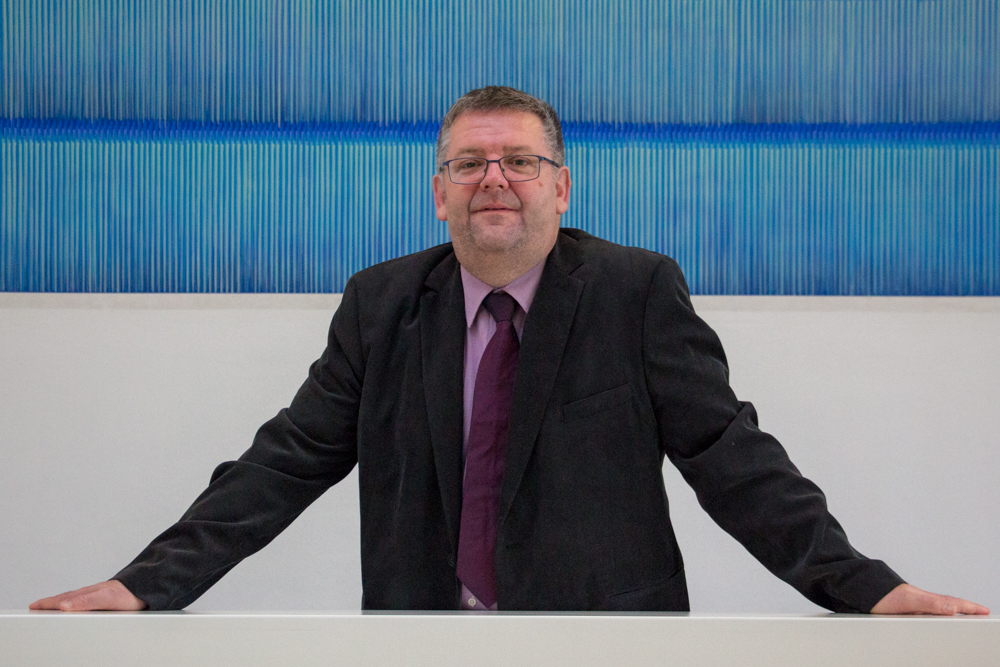 Zeitschriftenartikel
Distribution of temperature in a single lens due to absorption of light and heat conduction: an adaptive solver, vol. 7, pg. 12028.

In: Journal of the European Optical Society, Rapid Publications

We develop an algorithm for the solution of the stationary heat-equation in a single lens due to absorption of light, heat-conduction and transfer of the heat to the environment while we assume rotational symmetry for the whole situation. The proceeding is based on an easy to implement finite difference scheme, which is best suited for rectangular areas. Therefore, we have to transform the heat equation and the boundary conditions from the original domain, i.e. the surface of section of the lens by the aid of tensor methods to a rectangle. So the algorithm generates a grid, which adopts automatically to the actual shape of the lens. In this sense, we characterize the method as adaptive. In the examples, we investigate the effect of a high-transmission glass on the distribution of temperature and further demonstrate the adjustment to a realistic lens shape with a strong deviation from a spherical surface in form of a kink near the edge. We compare the results with a simple model for the distribution of temperature and show the strong dependency of the results on the transmission of the materials.
Zeitschriftenartikel
Radial distribution of temperature in a thin lens due to absorption of light and heat-conduction, vol. 122, pg. 1050.

In: Optik - International Journal for Light and Electron Optics

We consider the stationary radial distribution of temperature in a lens. For a thin lens, i.e. a two-dimensional model problem, we give an analytical approximation for the distribution of temperature, a quantity of great importance for the prediction of the performance of the lens. We compare this formula with the numerical solution of the heat equation for several examples. Finally, we discuss the incorporation of the heat-transfer to the environment in principle and give prospects for further generalizations of this theory.
Beitrag (Sammelband oder Tagungsband)
Radiale Temperturverteilung in einer dünnen Linse aufgrund Absorption und Wärmeleitung
Beitrag (Sammelband oder Tagungsband)
Charakterisierung, Modellierung und Propagation der Strahlung realer Lichtquellen in optischen Systemen
Zeitschriftenartikel
Head-up-displays: INOs senken die Kosten, vol. 16

In: American Journal of Physics

For potential tails consisting of an inverse-square term and an additional attractive 1/rm term, V(r)∼[ħ2/(2M)][(γ/r2)-(βm-2/rm)], we derive the near-threshold quantization rule n=n(E) which is related to the level density via ρ=dn/dE. For a weak inverse-square term, -14<γ<34 (and m>2), the leading contributions to n(E) are n=E→0A-B(-E)γ+1/4√, so ρ has a singular contribution proportional to (-E)γ+1/4√-1 near threshold. The constant B in the near-threshold quantization rule also determines the strength of the leading contribution to the transmission probability through the potential tail at small positive energies. For γ=0 we recover results derived previously for potential tails falling off faster than 1/r2. The weak inverse-square tails bridge the gap between the more strongly repulsive tails, γ>~3/4, where n(E)=E→0A+O(E) and ρ remains finite at threshold, and the strongly attractive tails, γ<-1/4, where n=E→0Bln(-E/A), which corresponds to an infinite dipole series of bound states and connects to the behavior n=E→0A+BE(1/2)-(1/m), describing infinite Rydberg-like series in potentials with longer-ranged attractive tails falling off as 1/rm, 0
Beitrag (Sammelband oder Tagungsband)
Near-Threshold Quantization and the Semiclassical Limit. Sitzung Q14.3
Zeitschriftenartikel
Comment on “Breakdown of Bohr's Correspondence Principle”, vol. 86, pg. 2693.

We study the near-threshold (E⃗ 0) behavior of quantum systems described by an attractive or repulsive 1/r2 potential in conjunction with a shorter-ranged 1/rm (m>2) term in the potential tail. For an attractive 1/r2 potential supporting an infinite dipole series of bound states, we derive an explicit expression for the threshold value of the pre-exponential factor determining the absolute positions of the bound-state energies. For potentials consisting entirely of the attractive 1/r2 term and a repulsive 1/rm term, the exact expression for this prefactor is given analytically. For a potential barrier formed by a repulsive 1/r2 term (e.g., the centrifugal potential) and an attractive 1/rm term, we derive the leading near-threshold behavior of the transmission probability through the barrier analytically. The conventional treatment based on the WKB formula for the tunneling probability and the Langer modification of the potential yields the right energy dependence, but the absolute values of the near-threshold transmission probabilities are overestimated by a factor which depends on the strength of the 1/r2 term (i.e., on the angular momentum quantum number l) and on the power m of the shorter ranged 1/rm term. We derive a lower bound for this factor. It approaches unity for large l, but it can become arbitrarily large for fixed l and large values of m. For the realistic example l=1 and m=6, the conventional WKB treatment overestimates the exact near-threshold transmission probabilities by at least 38%.
Zeitschriftenartikel
Near-threshold quantization and scattering for deep potentials with attractive tails, vol. 33, pg. 4033.

In: Journal of Physics B: Atomic, Molecular and Optical Physics

Near-threshold properties of bound and continuum states in a deep potential with an attractive tail depend essentially on a few `tail parameters', which are determined by the properties of the potential tail beyond the region of r-values where WKB wavefunctions are accurate solutions of the Schrödinger equation. One of these tail parameters is a length parameter which defines the singular contribution to the level density just below threshold and the reflectivity of the tail of the potential just above threshold; another is a phase difference which, together with the length parameter, determines the mean scattering length. The near-threshold quantization rule and the actual scattering length are determined by the tail parameters together with a dimensionless constant depending on the zero-energy value of the WKB action integral. We study potentials with tails consisting of two inverse-power terms, V(r)~-Cα/rα-Cα1/rα1,α1>α>2 and we derive exact analytical expressions for the tail parameters in the special case α1 = 2(α-1). This enables us to demonstrate the effect of a significant non-homogeneity of the potential tail on the results derived previously for homogeneous tails.
Zeitschriftenartikel
Tunneling and reflection of long waves, vol. 60, pg. 832.

We investigate tunneling through a barrier and reflection over a step potential in the limit of long waves, i.e., near the base of the barrier, or for barriers with a small action integral over the forbidden region, and at the top of the ramp where the usual semiclassical approximation breaks down systematically. General approximations of the probability of transmission and reflection are given and compared to competing ones showing that the present approach based on the comparison method can give far better results.
Beitrag (Sammelband oder Tagungsband)
Klassisch verbotene Transmission. A14.26
Zeitschriftenartikel
Quantum-mechanical deflection function, vol. 60, pg. 853.

The classical deflection function for scattering by a radially symmetric potential corresponds to twice the angular momentum derivative of the scattering phase shifts calculated in the conventional WKB approximation. A “quantum-mechanical deflection function” defined as twice the angular momentum derivative of the quantum-mechanical phase shifts (without WKB approximation) is able to incorporate into the simple trajectory picture certain quantum aspects of the scattering process, e.g., the influence of the Goos-Hänchen shift. We demonstrate the performance of this quantum-mechanical deflection function for sharp-edged and smooth-edged two-dimensional scattering potentials.
Zeitschriftenartikel
Scattering by a Coulomb field in two dimensions, vol. 66, pg. 274.

In: American Journal of Physics

Generalized WKB connection formulas are used to derive the transmission amplitude describing tunneling through a potential barrier via two isolated classical turning points. The resulting formulas correctly reproduce the behavior in the vicinity of the base of the barrier where the tunneling probability vanishes exactly, and where formulas available to date fail.
Cookies